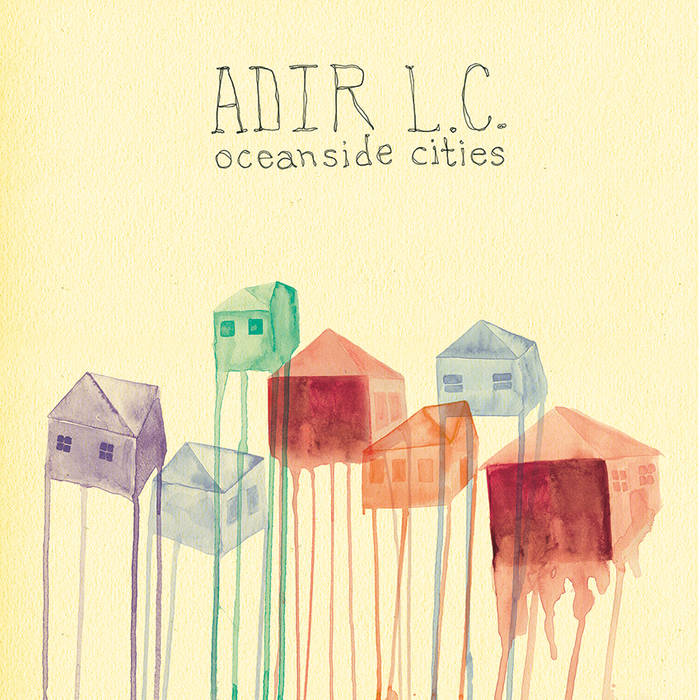 Nick Green From the opening bars you know you are in good hands- and best album cover of the year Favorite track: Half Right.

On Oceanside Cities, the globe-trotting songwriter Adir L.C. delivers a dramatic and lavishly detailed indie-pop answer to the timeless question “should I stay or should I go?” with a resounding “both.” Written in a variety of coastal cities including New York and recorded in Tel-Aviv, Oceanside Cities describes a young person’s search for identity and purpose as something essentially solitary and global in scope. Friends and community provide sustenance, love, and temporary shelter along the way, but, like a hero waylaid among the lotus eaters, in song after song, the singer struggles between the comforts of connection and the spiritual imperative of moving along.

Regarding the art of community-building and the art of moving along, Adir L.C. knows of what he speaks. He launched his musical journey in the same Glen Rock, New Jersey basements that nurtured Titus Andronicus and Real Estate. (His sound has more to do with glistening jangle pop of the latter, his generational spokesperson ambitions more akin to the former.) Signed young with The Medics, a forerunner of the band Le Rug produced by the songwriter John DeNicola and featuring future members of Porches., Adir got his taste of the indie foment of the early 2000’s before heading off to the college jam town of New Paltz, NY in 2007. There, he became a pivotal player and promoter in the fledgling indie scene that spawned What Moon Things, Quarterbacks, and the studio/label Salvation Recording Company.

It was also in New Paltz where Adir met former Wood Brothers drummer Jed Kosiner, his partner in the psych-folk outfit Fairweather Friends, a duo that could just as easily assemble as a ragtag, ad hoc collective and deliver ecstatic performances of Adir’s sturdy and deceptively savvy folk epics. Fairweather Friends released the well-received These Years on the Boat on Salvation and hit the road, from which Adir has never quite fully landed. Stints followed in various European cities, Los Angeles and finally Tel-Aviv, where Adir met the acquaintance of a young producer named Tom Elbaz, who would have an enormous influence on the dramatic, coherently layered sound of Oceanside Cities.

For all its complicated, multi-city birth story, Oceanside Cities is anything but a casual freak-folk travelogue; it is indie-orchestral, dynamic in its arcs, epic in its song forms and its flourish-filled arrangements, as Adir fully realizes the balance of confessional folk intimacy and broad pop ambition that his writing has always hinted at. In its blend, it is as easy to hear his love of the seminal guitar rock of Pavement and Built to Spill as it is to hear his parents’ extensive folk collection and his delight in buoyantly tuneful British Invasion pop.

Crowd-sourced, self-actualized and defiantly indie in the lost sense of that word, Oceanside Cities will be released on Adir’s own Dinky Pops Records on November 6, 2015.
(written by the incredible John Burdick)

All songs written by Adir L. Cohen
Tom Elbaz produced, engineered, mixed and performed on this record
This album was recorded in Florentin, Tel Aviv
Mastered by Jamal Ruhe at West West Side in New York

music from the heart, made to share. living on the line between NYC & TLV

Bandcamp Daily  your guide to the world of Bandcamp

outré black metal, with a Victory Over the Sun interview and music from Liturgy and Jute Gyte.